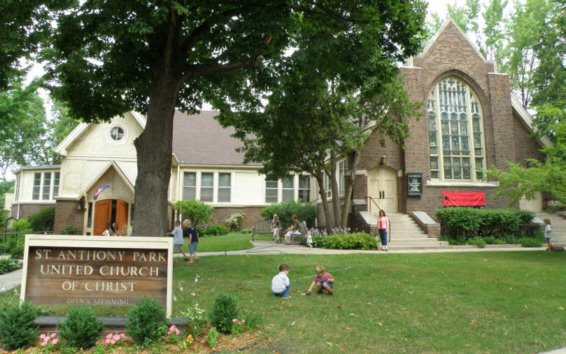 We are citizens of the 21st century, but we haven’t yet developed a 21st century mindset for the crowded planet we are living on. 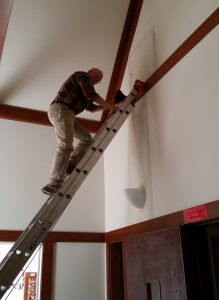 Our denomination, the United Church of Christ, calls us to a new mindset. It challenges each congregation to be carbon-neutral by the year 2030. But it doesn’t tell us how.

Our congregation accepted the challenge by generously funding our 2nd Century Energy Improvement Projects for reducing the carbon emissions from our building’s use of electricity and natural gas. That’s not yet a new mindset, only a start down the road.

Our intention after the fundraising campaign in 2015 was to do the attic insulation project in 2016, replace the boiler and improve ventilation in 2017, and replace some windows perhaps in 2018.

As we got into planning the attic project, we gradually realized how complicated a space it is. The attic has two problems energy-wise: (1) many air leaks exist through the ceilings, and (2) an air handler and ductwork floating above the insulation in what should be cold space. This result of the 20th century mindset is insufficient for 21st century carbon-neutral challenges.

Add the history of building modifications and you have a fascinating attic space to climb into. There’s a framework for what used to be the Fellowship Hall ceiling four feet above the current ceiling. And from there, rising plaster walls converge toward the roof where large skylights originally resided. It’s not all a simple open attic like the attic above the parlor – joists at the bottom and roof above.

However, not even the parlor attic is simple. We’ve poked recessed light fixtures through the ceiling, conducting their heat into the attic and providing air leakage paths around the fixture. To correct this, a box will be built in the attic over each fixture. Then a layer of sprayed foam will cover the entire surface to seal all the little air-leaking cracks. A thick layer of less expensive blown insulation goes on top. Here’s another challenge to the mindset.

Still in the 20th century mindset, we ask, “What’s the payback in dollars of adding more insulation? How long will it take for savings in energy bills to payback the cost of insulation?” And we ask, “What do we have to do to meet code?”

Dealing with the complexities delayed the attic project to 2017. The Council just approved proceeding with Kinzler Construction Services for insulation, Ericksen Roed & Associates for structural evaluation, Christianson Electric, and Terra Firma for building a new “floor” above the air handler and ductwork. Work starts in April. When finished by July the work will be invisible except for a pull-down stair in the Fellowship Hall ceiling, which, although visible, is expected to be inconspicuous.

A new double-pane window would have the same number of panes of glass as our existing double-hung with storm window. A new window would have less air leakage and slightly better R-value, still under R-3. The energy savings would be a very small part of our total heating energy. The 21st century mindset would move toward windows that are triple-pane, R-7 or more, and a lot more expense. With the money contributed to our 2nd Century Fund could we get a better return in meeting the UCC challenge by blowing insulation into the walls which now are empty cavities?

We are encountering bumps along the road to our 21st century mindset. May we be open to new ways of being.